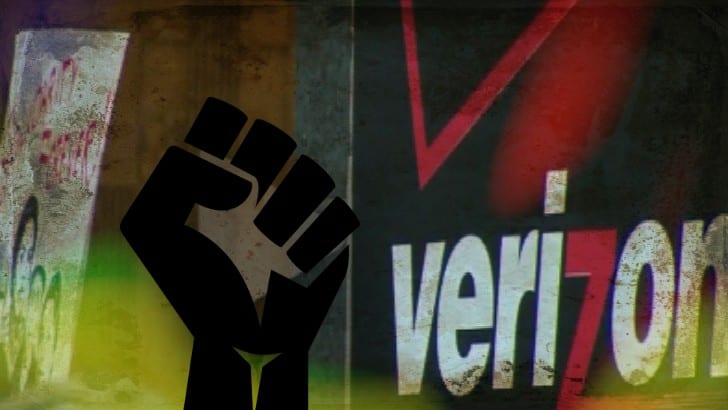 As the Verizon strike enters its fourth week, the 39,000 union members on picket lines up and down the East Coast—and now taking their campaign nationwide—are continuing to hold fast for a better contract than the giant corporation has thus far been willing to offer. But a strike is no walk in the park. Not in the America of 2016. On May 1, International Workers’ Day,  Verizon cut off health care benefits to the strikers and their families—an estimated 110,000 people overall. And while the two unions organizing the strike—Communications Workers of America (CWA) and the International Brotherhood of Electrical Workers (IBEW)—have socked away millions to pay strike benefits, helped members file for expensive stopgap COBRA health insurance, and even offered to pay medical expenses for members outright in the case of CWA, many people with chronic conditions are being put at serious risk of having their medical care disrupted. With potentially dire consequences.

Yet it’s difficult to find mentions of this vicious move by Verizon in the major American press. Coverage of the issue has been spotty at best. Despite it being a great example of why working families need proper national healthcare. Almost like it was not news at all. Even in centers of strike activity like Boston.

That’s a problem. When there are big layoffs by large companies owned by extraordinarily wealthy people, when wages are slashed, when huge numbers of jobs are outsourced to countries with even worse labor standards than our diminishing protections here in the US, much of the news media treats these tremendous crises for working people as mere footnotes to the much more important coverage of corporate bottom lines.

If any criticisms are raised—usually in passing and rhetorically—they are generally dismissed with easy answers. As with the 12,000 workers currently being laid off by microchip titan Intel. A recent and very typical article in The Oregonian, the Pacific Northwest’s newspaper of record, discusses the 2150 expected layoffs in their state matter-of-factly—explaining that Intel is “Oregon’s largest private employer and pays some of the state’s best wages.” So the loss of so many good paying jobs is really going to hurt the regional economy. But the piece then goes on to say that “Intel is a hugely profitable company—and a growing one.” It has other exciting divisions doing lots of whiz-bang things. Sure, those divisions are not necessarily in Oregon or even in the US—Intel being yet another multinational with robust manufacturing operations in low-wage countries like India—and it’s not at all clear that workers in those other divisions will make money as good as the laid-off American chip workers made. Nonetheless, the basic message of such articles is that “the market will take care of it.” Jobs will be lost here, but gained back elsewhere. Then all will be well and right with the world again.

But “the market” doesn’t take care of working families. It takes care of owners and top executives and big investors. Who use their massive and growing profits in this New Gilded Age to rig the political and economic systems to focus on their interests. Not everyone else’s.

That’s why Verizon’s union workers are on strike. It’s gotten to the point where they have no choice. In large part because the company has been doing its level best to wipe out its unions since its formation in 2000. To remove the last obstacle to allowing its management the freedom to do what so many non-unionized American companies are able to do to their workforces with impunity: ship many once-decent jobs abroad, and turn the rest into part-time, contract and temp jobs. Hiring people when they need them, and getting rid of them with impunity when they don’t. With no promise or expectation of good wages, benefits or job security.

All of these corporate moves are best described as economic violence. Because they destroy lives. And for all the criticism that labor gets for being unreasonable on the still-too-rare occasions that it mounts more than symbolic protests, unions like CWA and IBEW are remarkably restrained in the face of that ongoing violence. Hands tied by decades of anti-labor legislation, they limit their responses to those allowed by law: withholding their labor for as long as possible, picketing Verizon properties, “mobile picketing” (following scabs to worksites and talking to consumers about the strike), encouraging the public to boycott Verizon Wireless, and gamely waging PR battles in an often dismissive pro-corporate press. Trying to win enough hearts and minds to convince Verizon management that settling with the union is cheaper than letting the strike drag on.

Which might work this time as it has in several past strikes. But it’s getting harder for unions like CWA and IBEW as the years go by and their membership continues to shrink at the hands of mercenary profit-hungry companies like Verizon. They’re in a very difficult situation. But there’s one thing that readers can easily do to help expedite Verizon union workers’ herculean task of defending what they have while fighting to expand the labor movement back to some semblance of its former strength: When you hear about economic violence by bosses against workers, spread the word. Tell your friends, family and workmates. Don’t let atrocities like cutting health care benefits on striking workers remain a footnote in the national discourse. Make some noise. Then do the same at your own workplace when things get tough. Learn from Verizon’s unions. Fight back however you can. And in a few years, labor conditions might start finally improving for American workers again.

Readers who would like to support the Verizon strikers should visit standuptoverizon.com