New transit arrives in Somerville, met with a mixed bag of emotions

(Somerville Wire) – Somerville celebrated the opening of the first phase of the Green Line Extension, with new stations in Union Square and Lechmere, on March 21. The moment was historic, the result of decades of planning, and passengers, officials, and community members gathered to board the first trolley as it zipped along the tracks. In the coming months, the GLX will be extended to Medford, with its completion expected by this summer or fall.

The building of the GLX was promised as long ago as 1990, as it was intended to mitigate environmental problems caused by the Big Dig, the construction that had buried I-93 underground. Since then, there have been setbacks, with the Conservation Law Foundation suing the state for supposedly stalling the project, and for years the creation of the GLX was delayed.

Now, Mayor Katjana Ballantyne said, Somerville residents and other travelers will be able to enjoy the benefits of the new transit system. “I got involved in the issue because there was an environmental justice issue. They cut I-93 through Somerville. It was identified on the national level that there were harmful, environmental air pollution quality issues for working class people who lived in this area,” she explained, at a press conference. “Cities are dynamic. They’re not static. We’re growing. There’s not one reason for identifying what we hope the possibilities of the GLX will be. … The hope is that … with the opening of the Green Line that we have cleaner air, that people can walk around. The environmental benefits are that there are fewer car trips, less greenhouse gases, mitigation against climate change. [For] housing, people want to live near transit. I’m hoping that what we’ve tried to create in terms of a transformation in Somerville, that other communities will think about it. We have to zoom out. Our housing costs and rents will go down if there’s more housing in the supply.”

City leaders like Ellen Shachter, director of the Somerville Office of Housing Stability, acknowledged that the opening of the GLX is an achievement for Somerville that could change the face of the city. At the same time, she remains concerned about how the desirable transportation system could drive up rent prices—and already has.

Shachter stays anxious about displacement and hopes that the City will continue to make efforts to help residents, particularly people from low income households, stay in Somerville: “I think that the opening of the Green Line is a really, really important thing for the city. It’s really important for climate change, our transportation infrastructure, affordability, and being able to access locations in the city without a car—all of those things. At the same time, I am concerned about anything that creates further pressure on the rental housing market. I am hopeful, though, that the City and the State will continue to recognize the severity of the housing crisis and will continue to try to put significant resources in doing whatever we can to make sure that Somerville remains the diverse community that it has been, and that we are able to continue to expand the pool of affordable housing in the city. I am excited; I am nervous; I am all of those things.”

Other community figures, such as Ben Echevarria, former executive director of the Welcome Project, see that the GLX could be more efficient than the bus system and possibly create new jobs. But by and large, he is worried about the impact that the extension could have on immigrants and working class people, contributing to the gentrification of the city. With rent prices rising, he has seen many immigrant residents leave their homes to move to Malden, Everett, and Medford. While the GLX was originally intended to help marginalized communities, such as the working class, immigrants, people of color, and the elderly, he said that today, the groups it was designed to serve are no longer benefitting. When he became director of the Welcome Project seven years ago, 90% of the group’s constituents lived and worked in Somerville. That number is under 50% now. The opening of the GLX may signal big changes in Somerville, changes that may not improve the lives of everyone, as high rise buildings have begun to spring up across the city. He wonders what communities are actually reaping the rewards of the extended transit system.

“I continually say, who does it actually benefit?” said Echevarria. “I don’t see immigrants or people of color benefitting from the Green Line coming. I know that people want to celebrate this, but for me, it’s like everything else that we’re seeing. The rich continually get richer, and the poor continually get poorer, and they don’t get the justice they deserve. At the end of the day, people of color are still riding the bus. The majority of us will still be living closer to a bus station than we will the Green Line.” 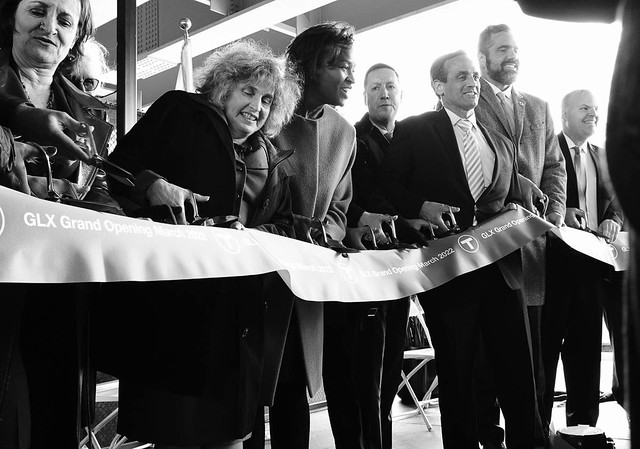 On March 21, the Community Action Agency of Somerville held a press conference prior to the GLX opening ceremony that drew attention to the issue of gentrification in the city. One speaker, Vanessa Vela, described her struggle with housing and the impact that the construction of the GLX has had on her life. Vela is an immigrant from El Salvador who has lived in Somerville for 17 years. Her son is an honors student in the Somerville Public School system. The two of them live with Vela’s mother on Walnut Street, and in September 2021, the building was sold. Vela worried that the rent would be raised because the train station was getting built nearby, and she told the Wire in an interview that “my worries came true, when they came and knocked on my door, saying they needed to take pictures of the apartment.”

From then on, Vela said that she has experienced pressure from the real estate company to leave the apartment, and she was even falsely told that the building was going to be demolished, as part of an effort to get her to move. The construction of the GLX has been a source of anxiety: “It’s a big stress, because of the raise of the prices. It has attracted people who want to live in this area. The school and the Green Line have attracted people from other areas, wanting to move here and live here. And I don’t find it fair that we had to live through the construction, the noise, and all this struggle, just to be kicked out, now that the final product is done.”

Nicole Eigbrett is the director of community organizing at CAAS. She said that in recent years, middle class residents and not just lower income families have begun to face challenges when it comes to keeping their housing. The changes in Somerville are palpable, she said, as she has seen towering skyscrapers go up near her place of work, a transformation that has made community members nervous and intimidated.

The City has taken measures to try to keep housing affordable, but it has not been enough, said Eigbrett, because CAAS continues to see people calling in and applying to services every week—the need is there. In Somerville, there may be an effect where there is a pronounced disparity between higher income households and lower income renters, as developers continue to push people out.

“People want to live in cities because it’s closer to their jobs. It’s closer to public transit and all these other amenities. But for us, it’s just really horrible, at a human level and also at a community level, to see families have to be ripped away from the places they call home. Because this is where their social fabric is, their neighbors, their schools, their hairdressers, their grocery stores, their churches. We have many tenants who are involved in the CAAS organizing program who know someone, or they themselves were displaced from Somerville, but they still continue to go to church here or still try to have their kids enrolled in schools here. Because they know and trust and love Somerville. At the end of the day, we want to make sure that everyone who wants to can live and remain here.”